Thank you for signal boosting our daily January 2016 #Kidlit4Justice picks on @HealingFictions! We hope that as you began the New Year, these reads helped inspire you to share with our youngest readers the many ways that they can change the world. 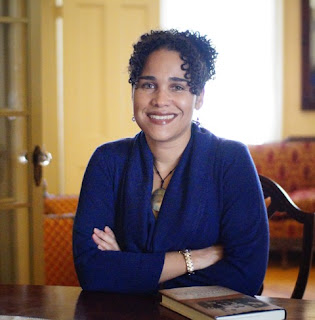 To wrap up our January 2016 #Kidlit4Justice hashtag, this month's featured blog post is an interview with award-winning author and activist, Zetta Elliott. Born and raised in Canada, Zetta has lived in the United States for more than 20 years. She earned her PhD in American Studies from NYU in 2003, and has written numerous poetry, plays, essays, articles, op-eds, novels, and stories for children.

Zetta’s debut picturebook, Bird, won the Honor Award in Lee & Low Books’ New Voices Contest and the Paterson Prize for Books for Young Readers. Her young adult fantasy novel, Ship of Souls, was named a Booklist Top Ten Sci-fi/Fantasy Title for Youth and was a finalist for the Phillis Wheatley Book Award. Her essay, "The Trouble with Magic: Conjuring the Past in New York City Parks," published in Jeunesse, won the 2014 Children’s Literature Association Article Award. An advocate for greater diversity and equity in the publishing industry, Zetta has also self-published many illustrated books for younger readers under her own imprint, Rosetta Press. She currently lives in her beloved Brooklyn, which provides the backdrop for many of her magical stories.

Zetta is a supernova. We first met through mutual colleagues in the children’s literature world several years ago, narrowly missed each other at NCTE/ALAN 2010 in Orlando, and became fast friends when I moved from Detroit to Philadelphia in 2012. Without Zetta, I could not have written The Dark Fantastic. Her 2010 Horn Book essay, "Decolonizing the Imagination," helped me theorize the imagination gap in youth media. Her clarion call -- that we can't wait for decades for our kids to see themselves in stories -- gave me the courage to advocate for the emancipatory tales that our children need. While her fiction, her essays, and her voice could have fit many other themes, I couldn’t imagine another person more suited to wrap up this month's theme of social justice in children’s literature, inspired in part by the King holiday. I am so grateful for Zetta's presence in the children's literature world, and quite proud to call her my friend.


1) How would you describe your experience of writing and publishing as an author who is also a woman of color?

“Well, son, I'll tell you:
Life for me ain't been no crystal stair.”

I’m not just a woman of color—I’m a Black feminist, and that makes the climb even harder, because I have a commitment to social justice that doesn’t allow me to “go along to get along.” And I think that’s expected in children’s publishing, an industry dominated by white middle-class women who’ve never been required to examine their own intersectional identities and attendant privilege. I’m 43 and I’ve been writing for kids since 2000. My first book wasn’t published until 2008 and despite winning several awards for BIRD, I wasn’t able to place any of my other manuscripts. So now I mostly self-publish, and that’s also challenging because of the bias against self-published books. But the production process itself suits me—I like the autonomy and with only 1% of publishing professionals self-identifying as African American, it’s unlikely I’d find a culturally competent editor within the traditional publishing industry. I just completed the sequel to A Wish After Midnight, my YA time-travel novel, and I sent it to an editor but fully expect I’ll have to publish it myself IF I want it to retain its Black feminist message. I’ve got a picture book in production that I plan to release in February, and that still leaves me with over a dozen manuscripts on my hard drive. I submit these stories over and over to editors who claim they’re desperate for diverse books, but invariably they reject them. People of African descent are notorious  “way-makers,” to borrow a term from poet Dionne Brand. We’ve had to learn how to make a way out of no way. Black feminists have been publishing their own (and each other’s) work for decades, so I see myself operating within that tradition.

2) Is there a common, overarching theme or message in your books that you hope your young readers will consider deeply long after reading?

My YA novels definitely deal with the way Black girls handle power. They wish they could control the circumstances in their lives, but once they do become empowered, they’re forced to sacrifice certain relationships—and they need guidance. As a Black feminist I’m trying to expose the specific challenges Black girls face—like sexual assault—while also providing models of community that can step in when families fail to support young people. I also want young readers to engage differently with history—to see themselves as shapers of history and not passive consumers of historical narratives that marginalize, distort, or erase people of color. I hope young readers come away from my historical fantasy books feeling closer to the past—feeling that it’s relevant to the way we live our lives today. I write magical stories because I want to feed their imagination—without new dreamers, this nation is lost.

3) What do you see as the connection between your work and the current political issues or movements of today?

Whenever an artist centers Black people in her art, that’s an implicit statement that Black Lives Matter. I write about racial violence in the past so that young people know the origins of riots in this country; I write about terrorism so they know who the original terrorists were/are; I write about sexual assault so that people recognize the ongoing exploitation of Black girls and women, which has been happening for centuries yet goes largely unrecognized and unaddressed. And I write fantasy fiction so that young people know that magic can happen to anyone, anywhere. #SayHerName #BlackWomenMatter #BlackGirlMagic

4) In an increasingly multicultural world, what role will intersectional literature play in creating a more just future?

I would refer readers to my Blackademics TV talk or my essay for Jeunesse, “The Trouble with Magic” (you can email me for a PDF). In it I draw upon Ramon Saldívar’s definition of historical fantasy, which doesn’t seek an escape from reality but instead proposes a more just resolution to the problems in the real world. I’m not sure I believe literature enhances empathy in young readers, but I think our increasingly segregated school system means that kids aren’t really relating to one another. If you’ve never met a Black girl and my books are your introduction, I hope that young reader would come away with a new perception that counters some of the most pernicious stereotypes.

5) A notable contingent of tweeters for #kidlit4justice have asked the twitter sphere to donate both money and books to libraries. What role have libraries paid in fighting for justice in the past, and does a similar role exist for libraries today or in future fights for justice?

I grew up depending on libraries. My family didn’t have much money and we had no tradition of buying new books, but we all had library cards. The only diverse books in my library’s collection, however, were the ones that managed to win an award—like Roll of Thunder, Hear My Cry. I think the field of library science needs to evolve and diversify so that collections do the same. The kid lit community in general is dominated by middle-class white women—they make up the majority of editors, reviewers, librarians, teachers—and they need to ask themselves what they’ve done and/or are doing to perpetuate racial disparities. Citizens also need to let their elected officials know that library funding is important, especially since public libraries do so much more now than just circulate books. The Brooklyn Public Library has sponsored my author visits for years, and through them I’ve reached hundreds of kids. But the BPL won’t acquire self-published books, so that leaves the vast majority of my books out of reach for kids who rely on the library. The BPL has asked me to develop a workshop on self-publishing and I think that’s the way forward—I believe in community–based publishing and think libraries should take the lead in developing producers of books, not just consumers.

6) As technology continues to evolve, what do you believe the digital fight for justice will look like in 50, 100, or 500 years?

To be honest, I probably won’t be part of that digital fight! I blog and I share things on Facebook, but I rarely tweet and leave hashtag activism to others. I think digital communities have the potential to extend our liberation struggles so that more people throughout the African diaspora feel connected to one another. I think videos increase our visibility, and I tend to think of my filmed talks and blog posts as a sort of archive. I may not get many hits the day I post an essay or video, but over time people around the world find my work. I feel the same way about my self-published books. If one kid finds my books at a critical juncture in her life, then it was worth it to publish outside the traditional system. Print-on-demand technology has really opened up a new set of possibilities for writers of color, and I hope more people realize that they, too, have a story to tell. They just have to take control of these evolving digital tools in order to share their stories with the world.