The SuperFriends and I have had an amazingly busy February! We greatly enjoyed participating in the National African American Read-In with ninth and tenth graders at Philly's U School on Friday, February 19, and at the Penn Bookstore on Saturday, February 20... as well as on our @HealingFictions Twitter account! We had a great time discussing our #AARI16 book selections, and can't wait to share our picks for Women's History Month under my #StoryGirls hashtag tomorrow. 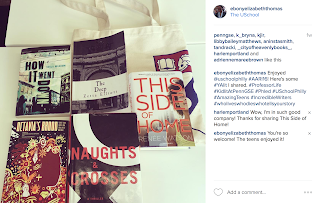 Later this week, we'll bring you an interview with two leading figures from African American children's and young adult literature. Julius Lester is a multiple award winning author, historian, and former professor at the University of Massachusetts - Amherst. He received the 1969 Newbery Honor Award for his groundbreaking book To Be a Slave, illustrated by the legendary artist Tom Feelings. Arnold Adoff is a notable poet, famous for his 1968 anthology I Am The Darker Brother, which was one of the first modern collections of Black poetry for children. He is the widower of the eminent children's writer Virginia Hamilton, as well as the father of children's author Jaime Adoff. For a second time, my wonderful doctoral students Sherea Mosley and Josh Coleman came up with the questions. I am so excited, honored, and privileged to be able share Mr. Lester and Mr. Adoff's profound insights about children's publishing and life.

In the meantime, on this Leap Day, I am reflecting upon our reasons for commemorating both Black History Month and the National African American Read-In. The NCTE website recounts the history of this major event celebrating Black children's and young adult literature:

"At its November 1989 meeting, the Black Caucus of the National Council of Teachers of English accepted the Issues Committee's recommendation that the Black Caucus sponsor a nationwide Read-In on the first Sunday of February. At the request of educators, Monday was designated for educational institutions. Dr. Jerrie Cobb Scott, an active member of NCTE and the Black Caucus, brought the idea to the Committee. It was envisioned that following a decade of rigorous campaigning for participants, the African American Read-Ins would become a traditional part of Black History Month celebrations. The commitment for nationwide promotion extends from 1990 to the present. In 1990, the National Council of Teachers of English joined in the sponsorship of the African American Read-In Chain."

We are proud to have been part of the 26th Annual National African American Read-In, both in the virtual world and in "RL" (real life), alongside thousands of kids, teens, teachers, parents, and community members around the United States. However, just because it's February 29th, and Black History Month is over, it doesn't mean the celebration is over! Please enjoy our picks so that you can make your African American Read-In last all year long.